If you are new to the idea of perceptions being projections, here’s what you need to bring you up to speed:

….and this can work positively or negatively. I once (only once), asked one volunteer to step out of the room as we were going to do an experiment. When he was out, i told the group that what I was about to say was untrue. I made sure they realised it was going to be an untrue comment, then told them that this man had killed his best friends dog! Then I told them again that it wasn’t true. We sent everyone on a break and, completely unconsciously on the groups behalf, they all avoided him for the whole break. When we asked him how he felt (as he had no idea of the experiment), he reported that he felt “separate”.

So, even if you know on some level that the idea is false, the whole nervous system gets engaged with ideas and thoughts and the body starts to experience these ideas as some kind of truth.

Take a look at how this works in the mind:

There is so much information out there, that yours and my mind have to delete, distort and generalise this information to make any sense at all of this amazing kaleidoscopic and tumultuous cacophony  of events that occur every second.

So there we are, the basics of perceptions.

Where can we go from there?

The great Hermes is given grace to having said as above so below.Here is an except from the full text.

True, without falsehood, certain and most true, that which is above is the same as that which is below, and that which is below is the same as that which is above, for the performance of miracles of the One Thing. And as all things are from the One, by the meditation of One, so all things have their birth from this One Thing by adaptation. The Sun is its Father, the Moon its Mother, the Wind carries it in its belly, its nurse is the Earth. This is the Father of all perfection, or consummation of the whole world. Its power is integrating, if it be turned into earth. Hermes Trismegistus

Also please note that huge figures from the past did not necessarily walk this earth. If you note the names of some of the most poignant figures, there are certain linguistic pointers to the abstract nature of their beginnings. For instance Hermes Trismegistus: In his own words he relates

…therefore I am called Hermes Trismegistus having the three parts of the philosophy of the whole world What I have to tell is completed concerning the Operation of the Sun.

So it seems that there are principles of life that are inside us, that correspond to the principles outside of us. Which feeds nicely into the most scientific of studies taking us into our bodies to discover that the very building blocks that make us into material beings are the very fabric of the universe. Scientists have even found atomic structures that appear as black holes inside our bodies.

And when you realise that our structures are mineral (bones), nervous system is a vegetable essentially (even the image of your bare nervous system appears like a huge tree-like plant) and the rest is animal (blood, skin, hair, teeth) – you get to see that we really are built of the very building blocks of this planet so far in its evolution. That’s why shamans can more easily call to ‘the wild’, because they recognise they are part of it and not separate at all.

Yes hermes was not confining our inside and outside to this planet. No, he meant the whole universe or universes of universes. What ‘he’ was talking about was that the very blueprint which is embedded as the code of all existence from time immamorial is also in us.

Which takes perception is projection to a whole new level. And why it makes working with clients with that in mind so much more relaxed. They have the universe inside them. They also have every answer to every question and every available resource (people have all the resources they need to succeed) to get what they want.

All you have to do is connect up from the disconnect!

On the Masters course, we exhibit the notion of a world beyond language (the middle of no-where, the field of all possibilities) where, when transported there, clients get to be connected to source once again, as if by magic.

And it looks and feels like magic – yet it is science, physics. We are taking them to the universal blueprint of all solutions and asking them to pick one, preferably one that lasts a lifetime (better commissions that way).

The Masters job is then just to bring them back to earth safely and start to recognise the changes back on earth (ratify the changes). 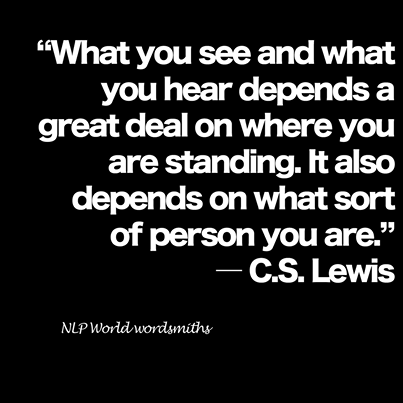 Where the perceptions of life have become more fun than before as adults, is that when we approach one another for experiences, with the knowledge that we are one aspect of this universe meeting another aspect. Both knowing (albeit unconsciously on various degrees) that we are the whole universe, coiled and shadowed; yet as complete as pieces of a jigsaw, waiting to be reassembled time and time again by our counterparts.

This meeting may not have had to have a beginning, or even an end, because they concepts and perceptions too. Yet the more conscious you and I are of the possibilities of our existences, the more fun and togetherness we can experience on the way. This attitude can also cause you to be a phenomenal therapist at the very least.

How you experience your clients the next time the walk through the door towards you may be mind blowing. Like yet another ‘big bang’.

And to finish, it was Buddha (or the energy of that notion) that gave us

it’s your mind that creates this world

Categories: NLP Posts, perception is projection
Tags: that which is above is the same as that which is below, Advanced Thinking on Perceptions
Share us on: