I could never do that. Take a moment to think about the actual logistics behind making a statement like this? Maybe I’m getting ahead of myself…let me take a step back by creating some understanding and context.

I recently decided to take part in a ‘trek’, seven days of walking along the pristine East African coastline. According to those “in the know” we were ‘heavy packing’. Meaning one carries all one’s supplies – tent, clothing, food, water etc. without assistance. The plan was simple. Walk 20+km a day, find adequate shelter, set up camp and refill water supply whenever the opportunity arose. Keeping it Spartan meant using Mother Nature as both a mattress and ablutions.

Keeping in mind, 1L of water weighs in at 1Kg and again according to those ‘in the know’, 5-7L should be consumed daily. But enough about the details, I had never attempted anything like this. Only once had I ever negotiated 25Km in one day. Nevertheless, deep down I knew that I would be able to complete this trek. Sure at times I would entertain various what if’s, and various other gloomy outcomes. However, these potential outcomes never really sat well with me, I just believed that I would be able to achieve my goal.

Success is something I value, thus it sparks continual motivational behaviours. With every step I took I began fostering an environment that would facilitate my eventual success. 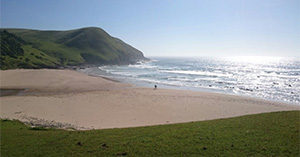 At times when I began to doubt my capabilities or beliefs, I started to realise that questioning myself meant that I was ultimately questioning my identity. Who am I, more importantly who do I believe I am? This helped me come back to my “now state” and being aware of the choices I was making and why I was motivated to select certain behaviours. It really does help if one continually asks oneself, is this decision moving me toward my values or is it moving me away from achieving them?

These series of questions and realisations guided my thinking process and ultimately every step that lead to my eventual success.

We were to depart just after the Christmas holidays and as the time drew closer, I was asked with greater regularity “so what are you plans for the holidays?” As I rattled off my trekking plans I was continually surprised at the amount of people who would without much hesitation blurt out “I could NEVER do that” and soon after followed up with “what if you don’t make it?”

Really? “I could never do that” .- really? At times I had to remind myself that one must be respectful of each individuals unique worldview. What struck me time and time again was the lack of awareness of just how often such limiting beliefs are uttered regularly and unknowingly. The sheer logistics behind this statement is baffling. I kept thinking “So, your telling me there is no set of circumstances that you could imagine to transpire that would empower or force you to walk nine hours a day for seven days on pristine African coastline; really, none?”

I’m sure many people are thinking, “You know that is not what they meant” well, what did they mean and why did they choose to say what they said? Furthermore, what other things are they (people) saying that they don’t truly mean and what does that say about their perception of reality and their identity? The thing about limiting beliefs is that they are rooted in the subconscious – often deeply ingrained with their true origins obscured by fear, ignorance, and habit.

It got me pondering about what people were telling me about themselves when blurting out “I could never do that” maybe they meant?
• I don’t want to do that, I need my luxuries and creature comforts,
• I have been so disrespectful and ignorant of my physical being that I’m currently physically unable to complete such a trek,
• I’m so afraid of failing that I would rather not attempt it,
• I would rather be sipping cocktails on the beach etc.

All things considered, only you impact your perceptions about life and that which you believe you can achieve.

As for “what if you don’t make it” – I’ll keep this short “there is no failure there is only feedback”. If you truly desire and value the accomplishment of a goal, you will find a way and you will achieve your goal. There is a rather large distinction between not attempting something out of fear of failure and getting feedback after attempting something.

In closing, who ever you think you are, you are always more than that. The human body fuelled by positive intent is a phenomenal being and capable of enduring many things the human psyche often dares not even conceive. You become what you think, literally. Your thoughts produce peptides used in the process of cell division that create cells with positively and negatively (charged) emotional reactions.

Be brave enough to isolate the true origin of your limiting beliefs and dare to dream. Dare to be all that you can be…the only one that is able to limit your potential…is you!