Overview of META-Medicine and its roots
META-Medicine is now called META-Health. I will begin here with a simple, easy to understand version of META-Medicine (Now called META-Health) with a couple of examples; then move on to a more in-depth explanation of how and why this model works with medical terms. Even if you are not medically trained, you will be able to follow the process through simple to scientific and medical data.
New workshop coming up in October 2020. Click here for details.
Listen to a radio interview about Meta-Medicine here:
My intention is that this model will become normal throughout our conversations and practices in health and healing. We are working with medical doctors now to introduce this system so it is easily available to all to train and educate.

My intention is that this model will become normal throughout our conversations and practices in health and healing. We are working with medical doctors now to introduce this system so it is easily available to all to train and educate. 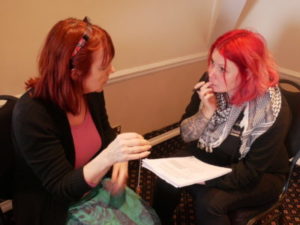 The beginnings of what is now called META-Health were about 26 years ago when doctors started to realize that patients had significant emotional events (SEE) prior to the onset of their symptoms of bad health. The correlation of these events to the various parts of the body has now become a vast inventory of case studies and successful diagnostics used all over the world. According to META-Health, there is not only a mind-body connection but actually a very precise organ-mind-brain-social connection. Each area of our brain corresponds to a specific organ and a specific conflict or trauma and an environmental-social experience.
As examples of what we have mentioned already, every organ is directly related to a specific biological conflict content. The skin (epidermis, upper skin) is affected by a loss-of-contact conflict, the breast (ducts) by a separation conflict, the lungs (alveoli) by a fear-of-death conflict.
This means our organism and specifically the organ-mind connection is way more “hardwired and bio-logical organized” than we have thought in the past.
If this is difficult to take in, then the flat earth to round earth must have been pretty much the same when the story first emerged.
I will give a few simple examples to enlarge the picture even more.
If a person has a fear of death, the system to respond (via the brain relays) will be the lungs. The alveoli inside the lungs (the cells that are responsible for oxygen intake) will start to multiply to increase the oxygen intake (for fight or flight purposes). This in itself is called a disease!
This is what is now called in META-Health the conflict stage.
If you are the person experiencing this stage, you may not feel anything happening. In fact, you may be running around being very busy and obsessing about life in some way, but you may not have any extreme bodily symptoms that conspire to be refereed. If a doctor were to examine you, even though you may not feel anything extreme, there could be a diagnosis of lung cancer, due to the speed and unrestrained multiplication of cells inside the lungs.
If the fear of death were suddenly to disappear, the microbes inside the lungs would then faithfully begin to dismantle the now unneeded extra cells inside the lungs, to be coughed out.
That is then diagnosed as Tuberculosis! This would be the regeneration or healing phase.
You may ask yourselves; when in history have there been the most prolific cases of TB in this country?
Well, that would be after wars, after the imminent fear of death has receded!
Another clear example of how the body works according to biological laws is breast cancer.
If a woman sees her child run into the road and she receives a shock from this unexpected incident, she may get what is known as breast cancer or tumor.
What is little known is that the body is only trying to compensate for what may have happened to the child. The milk ducts will enlarge to get more food and therefore more healing to the child. Again this will be diagnosed as a problem and surgery may be recommended.
Here is another astounding fact in our innocent evolution in medical treatments: In scholastic medicine; they have found that there are 500 cold diseases and 500 hot diseases.
These are supposed to be separate diseases. Isn’t that just a little bit strange? Just a trifle like a huge coincidence?
In META-Medicine®, it has been discovered that they are all part of the SAME disease process! In other words, there is a hot phase and a cold phase to ALL disease. So this natural process that the body goes through will be cold in the conflict phase and warm/hot in the regeneration phase.
Think back to the example earlier of lung cancer and TB. Lung cancer would be the cold conflict phase and the TB would be the hot regeneration phase of the SAME disease cycle!
The future of META-Health will be underlined in the next few years when we have seen the effects of new treatments by doctors who have already started to use this diagnostic tool in their practices.
For now, we can start to arm ourselves with the knowledge that the body has no accidents, only processes, some quite ancient, to attempt to balance a system that went awry.
Click here for some more in-depth research from Meta-Medicine
Click here to go directly to Susanne’s website for details of the Meta-Health workshop.
Click here for the Meta-Health book
META-Medicine® and its roots