The Presuppositions of Success and Failure

The Presuppositions of Success and Failure: Written by Wesley Kew and Terry Elston

How often have you really wanted to do something or see somebody else doing something and uttered, “ I wish I could do that”. Instead of just getting started, we proceed to list all the reasons why we would not be able to do it. I mean who am I to think that I can do a handstand or start a business.

In the immortal words of Marianne William’s quote “Actually, who are you not to…your playing small does not serve the world”.

This divided mind or doubt riddled thinking is a self-defeating cycle of despair that is self-imposed and perpetuated by limiting beliefs. What if I were to tell you that the whole universe is one organism, like an orchestra. And there exists an overabundance of players to play with, instruments and resources, should you decide to align with them.

What if I told you that experiencing the divided mind or doubt starts when oscillating between not believing in or feeling the connectedness that exists in our universe? Of course this is big picture thinking, yet you are the big picture.

And how can you even conceive greatness if you don’t already have that program inside of yourself? If you can see greatness in others it is because that greatness lies within you! 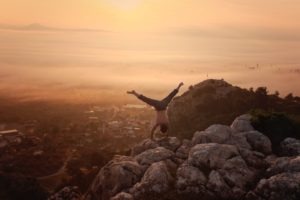 I was recently challenged with the situation of someone claiming that they could not do a handstand. Stating that “…it is impossible.” Before you begin to query the individuals’ physical capabilities let me cut you short, as they possessed all the needed attributes and some. However, after delving a little deeper into theses limiting beliefs? We soon discover that the perceived ‘fear’ of doing a handstand is in fact connected to being embarrassed or scared of falling in front of people.

Combining the use of Time Based Techniques and the NOW state, we uncovered early memory’s relating to embarrassment after trying something new in front of people. The fear of falling is actually called Basophobia. It never ceases to amaze me how people manifest their limiting beliefs in various forms. One can see how handstands/being alone/spiders/substances became an acceptable and safe way of re-experiencing or avoiding various lived experiences.

All too often in moments of feeling embarrassed, we may say things we don’t actually mean. Think about it like this. If a young child or even a teenager for that matter reported that they would never again ride a bicycle following an embarrassing incident, what would you think? Or if an adolescent reported that they would never again permit themselves to fall in love following a breakup, would you bet your house on this ‘hot tip’.

I’m assuming that like me, you have your doubts about both the previous statements validity and longevity. Yet, many people all too often turn emotively charged situations, like mentioned above, into limiting beliefs.

This mind-set does not bring about a desire to try new things. So instead of attempting to play the guitar, surf or learn to paint we rather fabricate excuses as to why we can’t do it. It has got nothing to do with the actual activity we desire to master. It is about avoiding the feelings related to learning something new. It’s engaging with the unknown, frustration of not getting it right immediately, being patient and at times experiencing feelings of not being good enough.

But that is just it; you have always been good enough. You have all the resources you will ever need inside of you already; you just have to believe it. When you are willing to just engage with enthusiasm, not be distracted by the little voice in your head and give yourself over to a ‘master/teacher’ the skill will come. Empowered by your intention and engaging in committed practice will show you to learn how to play the guitar, surf, master tennis or play the piano.

Where NLP has pushed the envelope in progressive internal language are the nlp presuppositions. If you’ve never heard of those, they are language patterns designed to replace any doubting thoughts in your mind with carrier waves of purpose, intelligent thinking and grounded philosophy.

For instance, “People have all the resources they need to succeed”. Is it true? It really doesn’t matter. Yet when focused on, as a Practitioner or as a student, it’s amazing how magically resources appear! As long as we give into “I haven’t got enough”, or “I can’t do it because….” We are doomed.

When we live by empowering presuppositions we are more able to guide our emotions and delve into them when they do not serve or empower us. Moreover, the presuppositions give us a place to go when our minds would naturally be lazy or pre-programmed elsewhere, less useful.

One of our favourites, “There is no failure, there is only feedback”, is logical in as much as the moments after not doing something the way you’d like to are the most important to learn from. This is what makes a master, as opposed to a failure. 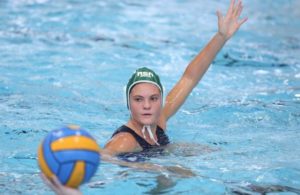 Wesley Kew was the sports psychologist for the under 17 female water polo team to gold (for the first time ever) using this NLP presupposition. The captain of the team mentions this later on in the article. Full article here:
Begin to seek out opportunities to be uncomfortable, for there is no progress without struggle. We as people are powerful beyond all measure and seldom even scrape the limits of our potentiality. Your greatness is only limited by your mind. In fact, your greatness is limited only by your imagination, dare to dream and dream so big that your dreams scare you.

Remember that if you can dream it you can do it. And if you want to do it, get started and keep on going and going. Soon what was once hard will become easier and easier. Before you know it you will develop confidence and eventually you will master your craft.

The Online NLP experience with NLP World is a world of difference. Some organisations like to trick you into thinking NLP is a skill set